Removing Scratches in your Aquarium: A How-To Guide

In the course of owning an aquarium, most likely during a cleaning, a scratch might occur on the aquarium’s glass or acrylic surface.

Depending on how noticeable it is, it might be something you decide to ignore, or something you want to get fixed. Thankfully, most scratches in glass and acrylic are reasonably easy to repair.

Protective Measures
If the scratch is on the inside of the aquarium, you’ll have to take some extra precautions to make sure that you don’t contaminate the aquarium during the buffing process.

First, drain some of the water out of the aquarium, giving yourself several inches under the level of the scratch, so you have some room to work with.

Then, place a sheet of plastic foil on top of the water surface, and use some tape to secure the foil to the four sides of the aquarium. This gives you a surface that will catch all the buffing residue and prevent it from ending up inside the aquarium water.

How To Remove Aquarium Scratches

To buff out a scratch from glass, first you’ll have to get your hands on a chemical called Cerium Oxide (often used by jewelers). Then, buy a hard rubber disk and a buffing pad extension for a power drill or an oscillation tool.

Mix the cerium oxide with water to create a paste, and put a little bit of the mixture on the buffing pad.

You can now begin to buff out the scratch, but be sure to keep the drill on its lowest setting. Buff until the scratch is removed to your satisfaction, checking the glass periodically to make sure it isn’t getting too hot.

When done with the steps above, carefully wipe down the glass to remove any remainder of cerium oxide and you should be good to go.

Acrylic is increasing in popularity as a material for aquariums, because of the many options it provides, such as curved walls, spheres, etc. Acrylic surfaces are easier to scratch than glass, but also easier to repair.

To get scratches out of acrylic you’ll just need some wet/dry sandpaper and a solution called NOVUS (think of it as even finer grit sandpaper, in paste form).

For moderate scratches, it’s best to start with around 400 grit sandpaper (remember, always keep the sandpaper wet) and progress to 800, 1000, and 2000 grit.

After you’re done with the 2000 grit, the surface should feel smooth, but will exhibit some “haze” from the micro-scratches made by the sandpaper.

From there, use some Novus solution on a towel and buff until the acrylic is as transparent as it was originally.

As with glass, you have to keep the acrylic surface from getting too hot (acrylic will actually melt under high temperature). You can do this by keeping a small bowl of water and occasionally wiping down the acrylic surface during the sanding process.

There you have it. Whether your aquarium is made of glass or acrylic, the above steps will help you get rid of pesky scratches and restore your aquarium to its previous splendor!

We're not around right now. But you can send us an email and we'll get back to you, asap. 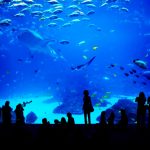 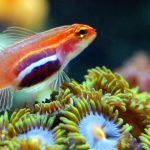